As if I needed to prove my eccentricity any further – I LOVE BOAS.

I have incorporated a boa into every Halloween costume I have worn for years.  The Halloween before last I was the Black Swan (which was a much more interesting concept when my friend Mary Charles was going to be the White Swan, but she became ‘Sweet As Pie’ at the last minute, so I was the lone black swan – very fitting at the time I might add).  I made my costume the night before the party after going to a painting class where there was quite a bit of wine consumed.  So picture me cutting up a boa and sewing feathery pieces all over a leotard after consuming quite a bit of wine (and no, the consumption did not stop because I was home). 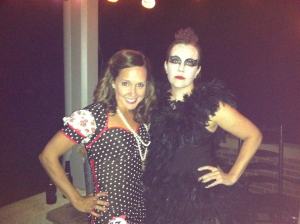 There were black feathers behind me like bread crumbs all night in case I got lost.

I think I broke three needles on my sewing machine and my house looked like a black bird was murdered in it, but the costume was a wild success!  My housekeeper told me months later that she was still finding black feathers in the house.

And boas are only one of the many things that I enjoy doing that would make me eccentric… I once vacuumed my house wearing a tiara and a mink stole.  Of course I realize that sentence would have been much more interesting to my male readers if I had ended it with ONLY, but I’m not going to lie… I mean, I had on my sweat pants and t-shirt under it.  A true southern woman would not be caught dead in a tiara and mink stole alone.

I wonder if this eccentricity will continue now that Joe and I are married.  I’m thinking it’s the perfect ingredient to keep our relationship interesting…..

One thought on “My Eccentricity Part Deux – Feather Boas”