My son’s AAU basketball team is playing is the Nationals this week in Myrtle Beach.  If there has ever been a time that I felt compassion (or should I say sympathy?) for my ex, it would be right now.  He has the team staying at his house all week… a whole house of loud, excited, stinky 8th grade boys. 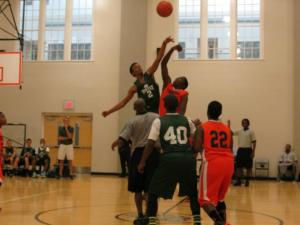 Did I mention they’ll be playing basketball every day?  And they’re stinky????

They truly are a great group of boys and no doubt this week will be something they will remember for the rest of their lives.  I commend Les for making memories for these boys.  I have already said a prayer for him this morning.

Yes, I pray for my ex.  That is a foreign thought to a lot of people who have gone through a divorce, but it’s something I try to do daily.  Along with praying for my husband’s ex and even the future spouses of our children.  They are all part of my daily prayer.

Why do I pray for my ex?  Because he is the father of my children.  Praying for him is praying for my children.  I could never wish any ill on him because that would be harmful to my babies.  As I have told my kids many times over the years, we may not have been able to make our marriage work, but I love him regardless because he gave me those two amazing children.

Some people wish the past never happened, but I can never question why my past happened when I look at my babies.

The thing that matters the most now is how we all handle the present.

It is so important to children for their parents to get along – even after divorce.  Too many parents are self-consumed and too busy licking their own wounds to realize this.  Over the years I have had many children tell me exactly how they feel about this.  I don’t just mean my own children and stepchildren, although they have all four at different times talked to me about this.  Friends of my children have commented on it.   I even had a stranger say something to me while playing with my kids on the beach.  She said, “That’s my dad over there.  My mom is not here.  They can’t even be near each other…”  Her sweet little eyes showed exactly how that made her feel.

How often do you hear a child say, “I wish my parents would stop being so nice to each other… she really should do things to punish him more”??????

And being nice is certainly not always easy.  I had a friend call me yesterday because she wanted to talk about her ex and a situation involving her child.  It was heartbreaking because it involves a very serious issue that she doesn’t know how to address.  Her relationship has been so good with her ex for years that she doesn’t know how to handle it because she doesn’t want to destroy the good will they have worked so hard to establish.   I sadly had no answers for her, but I listened and tried to give my thoughts.

Even through a situation that was causing her a lot of angst, she was still trying to focus on how to keep her relationship good with her ex because she recognizes how important the co-parenting relationship is – even when the other parent is not really carrying their weight.

So why do some parents attempt to sabotage any relationship they have with their ex?  One of my friends is a divorced dad and his kids live in another state.  His ex won’t let him talk to the kids when they are with her and she sometimes doesn’t even bring them when it’s his weekend to have the kids.  He is having to pay an attorney to try to modify his Custody Agreement just so he can talk to and see his kids.  In attempt to punish him, she is causing great harm to her children.

It is shocking to hear how many stories people tell me about fathers who WANT to have an active role in the lives of their children on a daily basis but are denied this opportunity by the mother.  Considering the statistics of what happens to children (especially daughters) who do not have an active father, you would think these mothers would be thankful to have a dad who cares.  It seems like in the news the assumption is that all dads are every other weekend dads and that is all they even care to be.  THAT IS FALSE.

I have numerous friends on Facebook who are newly divorced who have 50/50 custody of their kids.  That is not something that was prevalent when I got divorced nine years ago.  Fathers are taking a stand to have a more active role in the lives of their children after divorce and I commend them.  As I have said many times in the past, my ex plays a very active role in the lives of my kids by talking to them at least twice a day and never going more than a day without seeing them.

I am so thankful that if my son is being disrespectful, I can call his father and say, “Guess what your son just said to me????” and hand my son the phone.  I have faith in knowing that my ex will support me and take care of the situation just like if he were actually here.

When I tell new people how active my ex is they often comment on how that seems “excessive.”  My response is always, “If we were still married then he would have more contact with his kids than that.  So why should I deny my kids their father if he truly desires to still be a daily part of their lives?  Would I say it is excessive if it was my son’s best friend calling twice a day?  No.  So why should it matter how much they talk to their dad?”

I am not saying that this kind of contact is for everyone, but it works for us.   My children are well adjusted and happy.  I have never heard them complain about having to talk to their dad too much.  It’s just our way of life and it is definitely in the best interest of my kids.

Their dad is happy because he has a daily role in the lives of our kids even when they are not spending the night at his house.  Because of that, my relationship with my ex is better because I am not robbing his kids from him on a daily basis, so I am happy.  And because our relationship is good, my kids are happy.