As you have probably surmised through my posts, I am a stress cooker.  Some people like to eat or drink or smoke…I cook.

And not necessarily for myself.  I can’t even begin to tell you how much time I spent in the kitchen when I was in law school as a single mom at 35.  There is no better therapy to me than turning up the music and cooking.

And I absolutely adore seafood.  I cannot even begin to imagine what life would be like without shellfish.  It makes my heart hurt to think about it.  I think it would be like being allergic to bacon… DISASTROUS.

Some of God’s little gifts for my belly.

So the other day I decided I wanted to try to recreate one of my favorite dishes from a great restaurant in Atlantic Beach, NC.  I knew in my head what I wanted to make, but I wasn’t sure where to start.

This recipe uses Ritz crackers instead of bread crumbs.  Definitely worth making.  I used a red pepper rather than a green pepper in mine.  I read a lot of the reviews and saw that a lot of people complained about the crab cakes being too runny.  I followed the advice of some who said not to add more crackers.  Instead I shaped the crab cakes and put them in the fridge to congeal a little before frying them.  They came out beautifully and I would not change a thing.

Frying them up in peanut oil.

Now for the fun part of the dinner… I made pasta with a chipotle cream sauce.  And it turned out absolutely PERFECT.

How perfect?  Joe actually ate a little and said, “THIS is why we never need to go out to dinner again.”  Yes, it is expensive because of the crab meat, but well worth the money and I ate the crab cakes for DAYS.  So here it is…

Pasta – Cook a box of Penne Pasta until al dente and drain.

Veggies for Pasta – Chop up half a red onion and half a red pepper.  Cut the corn off of two ears of corn.

Heat about a Tbsp of oil (I used about 2 Tbsp of bacon grease I had leftover from breakfast instead – YUM) in a pan and saute veggies until tender and set aside.

Prepared veggies for the pasta 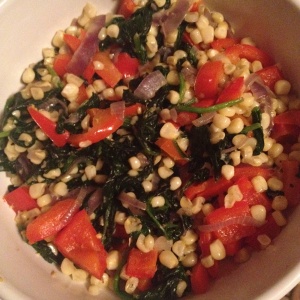 I cooked the spinach WITH the veggies and think they wilted too much… I will do it differently next time.

Sauce for Pasta – Heat three Tbsp of butter in a heavy saucepan over medium heat.  Saute two small minced shallots in butter.  Take a can of chipotle peppers and seed & chop 5 chipotle peppers.  Add peppers, 1 Tbsp of the chipotle adobo sauce, 1/2 a glass of dry white wine, and 2 cups of half and half.  Let simmer and stir constantly until it thickens.

When sauce has thickened, add veggies and continue to stir.  Add a container of uncooked spinach (I think my container was 4 oz) and stir until spinach has wilted to your liking.  Add pasta and a handful of chopped cilantro. 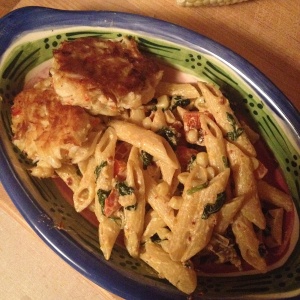 Serve with crab cakes for an AMAZING DINNER!!!!  I have to say that I outdid myself on this one.  I can’t wait to have a dinner party soon so I can serve this to my friends!