The Durham Bulls had their opening night last night and it was so much fun! We only had two of our kids, so we had a smaller crew than normal, but it was a great time.  The sounds, the sights, the smells… and a W for the Bulls!!!! We have mini-season tickets, but since this game wasn’t included in our package we sat in the outfield.  I can say one thing with certainty, there was a lot of interesting people-watching going on!  I like our regular seats better because there aren’t many people in front of us, which allows me to focus my attention on the actual game rather than the people around me.

Hattie really wanted to get the wave going, so she was thrilled when a boy sitting near us decided to take matters into his own hands.  We always participate in the wave, but it was fun to see it close up from the start.

When the wave starts, you only have a small group of people who stand up, wave their arms and yell.  Each time they start the wave, it goes a little farther.  Then a little farther… until you have this:

This made me think about the snowball effect of negativity in divorce.  It may start out small with you nitpicking small transgressions you feel your ex is guilty of doing, but it can quickly get out of control with you becoming obsessed with bringing everything that you think he/she is doing wrong to light.  Usually this is actually done with good intentions.

This constant barrage of insignificant transgressions will only cause you to be miserable as you perceive the transgressions as personal attacks on you.  And one thing I have learned for sure in my life is that if I let things bother me based on the actions of other people, I am letting them win.  Not only that, but I am miserable while they continue to be happy.

I explained this concept to one of my girls the other day when she was talking about something that someone did that “made her angry.”  I told her that she couldn’t let someone else’s actions make her feel bad.  She has to choose to let it go (yes, that was my motto well before Frozen came out).  My example to her was, “You are going to make yourself miserable thinking about it while she could be having the happiest, best day of her life!”  Her response was, “Not if I tell her how it makes me feel.” And I said, “But she may not care, so it will make you feel even worse.”  LET IT GO…

In divorce, we have to learn to let things go that we may not want to let go and we need to choose our battles.  You and your ex are not going to agree on things.  Take that to the bank.  But you have to choose to let things go so that you can be happy and move on with your life.  You have to stop the wave before it takes off and focus on your own happiness.

I often admit my own inadequacies when I write, which is what a lot of people say they enjoy about my blog… and I do admit that I remember the days when I used to email my ex about things that my kids would tell me as soon as they came back from his home.  I remember being infuriated with him and I remember him saying (a phrase I heard often that would only infuriate me more), “Per usual you don’t know what you are talking about.”  Ouch… I had verbalized in bullet points my argument based on something the kids told me and I got… gulp, THAT.

It took a while, but after being blown off enough in my quest to be heard by him I realized it wasn’t worth the energy or the anger.  I was furious and he couldn’t care less about how I felt.  What was the point??? I felt bad and he probably didn’t think another thought about it.

If you know someone who is in the throes of divorce, don’t be a negative advocate who only fans the flames of anger by telling them things you hear or encouraging them to “teach him/her a thing or two.”  The best friend you can be would be to encourage them to move along… transcend…. choose their battles... let it go.  If you can help them refocus and remember the good that has come, then maybe they can stop focusing on the negative.  You can help them stop the wave of negativity that has taken over their lives.  Change is very difficult, so they will need your support.

I need to change my eating habits, so I would appreciate some support on that if you’re in the helping mood… 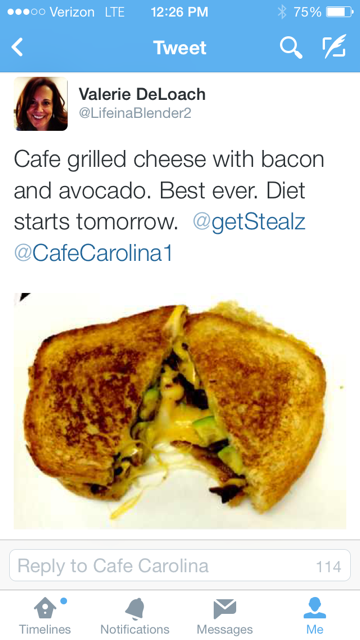