This may end up being a jumbled mess of just words, but they are my thoughts that are overflowing from my heart the day after Thanksgiving. Yesterday was such a day of juxtaposition for me. Thanksgiving is a day of family and joy and gratefulness, but at the same time we started the day at a Turkey Trot to support childhood cancer while some old friends’ daughter is in pediatric ICU fighting for her life… then there was the typical teenage angst drama with our boys… all culminating with the death of my father’s mother last night.

You may wonder why I say “my father’s mother” as if I don’t really know her. Honestly, it’s because I don’t. Not like I should. My father was adopted as a baby by my grandparents, Revie and DeRoche Vincent. They were clearly wonderful parents because my father turned out to be, well… Charles Vincent. “The Honorable” Charles Vincent. And it is easy to say he was honorable well before he became a judge. I’m not naive enough to believe my dad is perfect. I am sure there have been missteps along the way and things in life he may regret, but he was raised to be an honest, kind and loving gentleman. There truly aren’t many like him around. He brought so much happiness to my grandmother and granddaddy. I feel confident in saying their pride in him was strong even in both of their last breaths.

While I could claim that grandmother and granddaddy did it alone, I can’t. After meeting my father’s birth mother and her family, I realize that genetics is even stronger than I knew. I always believed in nurture over nature… until I met them.

My dad had always wondered about his birth family, but it wasn’t until after the death of my grandparents (and with my grandmother’s blessing to do so) that he really start looking for them. He had gone to the Children’s Home to get information previously and saw from across the desk that his birth family lived in Virginia. He and my mom made many trips to the area for weekends to visit and dad would just look at the people in Floyd and wonder if they shared the same eyes or the same mouth. One trip to Floyd, VA they got a little side tracked and ended up pulling into a church parking lot to look at the map. Little did dad know what that church would end up meaning to him.

In 2008, prepared with pointed questions just like he would be prepared for interrogating a witness, he went back to the Children’s Home. He learned that he was actually born in Winston-Salem, NC and he had always been searching for his birth certificate in Virginia. Within 24 hours the investigator had located my father’s birth certificate. The miracle in this is that they used to pull off the birth certificate so there should not have been a record of it, but there was an error on his original, so they created TWO – one of which was still in the record books. We knew the name of his birth mother.

I was in Pinehurst for the week with my parents when we got a copy of his birth certificate. I jumped on my laptop and started searching. I found a pastor of a church in Virginia who had a mother with the same name and when his picture popped up we just KNEW. Mom and dad made a trip that weekend to the church to hear the man who could be his brother preach. When they pulled up, they realized it was the exact same church where they had stopped years before to look at the map!

It was a small church, but the people were very welcoming and dad spoke to some of the people around him. He asked if the pastor’s mother went to the church and he couldn’t believe it when they said she was living but lived in Martinsville. After the service, mom and dad shook hands with the minister and left. Mom said it was such an odd feeling to see dad shaking hands with a man who clearly resembled him. As an adopted child, he was not accustomed to having anyone (other than his kids) “resemble” him.

Dad mailed the minister a letter and asked to meet with him after the service the following Sunday. He said he could call him if he wanted to talk before then. The minister called and dad introduced himself and he told the minister that he was adopted but he thought they may have the same mother. The response that came was better than dad could have ever imagined… the minister said, “We have been waiting for you. Our mother is going to be so happy.” The following Sunday they had a “homecoming” at the church for my dad.

They have embraced our family as part of their own. Dad has five brothers and one sister. Since their family has reunited they have already suffered the loss of the oldest brother. Last night, his mother went to be with the Lord.

My regret is that I did not get to know her like I should have. I was unable to spend the time to get to know her over the past few years because of everything going on in my life, but admittedly I had a little internal struggle with my loyalty to my grandparents which probably got in the way of my efforts.

I have heard that “Grandma” was an amazing storyteller with a great sense of humor. She was also a peaceful person who could teach you a lesson without yelling or condemnation. Everyone who knew her said it was a blessing just to be in her presence. They said her love was abundant and her faith was unwavering even through some terrible hardships in her life.

This morning as I sit here thinking about her death, I realize that if she was like my father in so many ways, then I have truly missed out on getting to know an amazing person. My father may be a judge, but if anyone has ever been in front of him in court they know that he judges the facts… he never judges the person. He uses experience and stories to teach lessons to the defendants in his courtroom and his children and grandchildren. And just like his mother, he loves the Lord with all his heart.

I’m being very vulnerable as I type this through tears this morning, but I want others to realize that life is too short. We need to love others every day and don’t miss the chance to get to know or love someone just because you are “too busy.” We are all busy, but we could miss out on a chance to catch a shooting star. My heart is heavy this morning knowing I missed my chance.

Although I may not have had her throughout my life as my Grandma, she is teaching me lessons now through her death. She has taught me to put my family first… ALWAYS. She has taught me to love others unconditionally and to show them that love every day. You don’t have to say “I love you” over and over if you daily live a life that shows those you love that you do. She has taught me to be selfless and to love God with all my heart. She has made me want to strive to be the person that she was to her family so that I too can have a legacy like she has. 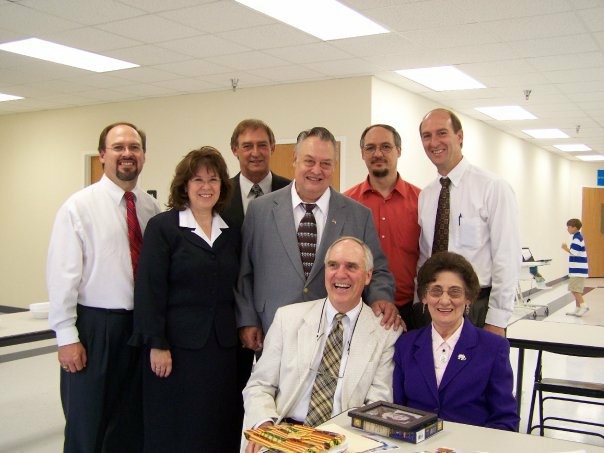 That’s my dad sitting next to his mother surrounded by his siblings. I love how happy he looks…

2 thoughts on “My Father’s Mother”