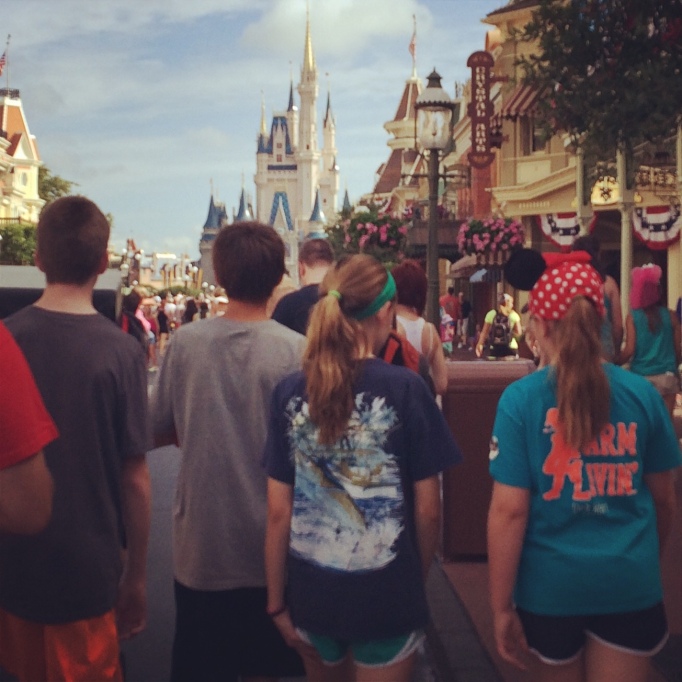 Summer is upon us!! In a blended family, summer presents an assortment of planning issues and hurt feelings. It’s tough enough in a divorced family to deal with scheduling issues, but throw another family in the mix and you feel like burning your calendar in the backyard fire pit rather than trying to work them out.

As we were working out custody schedules this summer, it turned out that we would not have my step kids with us on our planned family vacation to Myrtle Beach. The vacation had to be a specific week because we were planning it to coincide with a basketball tournament we would already be participating in. Of course I was not too happy to learn that two of our kids would not be on our family vacation! So I swung into action…

I found out we would have my step kids the week after school got out for my kids, so I started planning. I wanted to do something not too crazy, but fun…. something where we could really have family time… but everyone would enjoy it. I wanted to go somewhere we could drive… Yeah, we went to Disney World.

Thankfully my ex-husband gave up his first week with the kids after school got out so that we could throw all six of us in the Suburban and head south. For weeks before the trip I was convinced I had lost my mind. As I booked dinner reservations and Fast Pass reservations I started to second guess myself.

Disney World in JUNE? It may be hot as the devil! Making an 8+ hour drive with four complaining kids? Not even frequent stops to Cracker Barrel would help the misery! Not to mention to save money I booked a two bedroom condo, so I was fearful the kids would fight incessantly the entire trip.

A week before we left I received a call to confirm my reservations and they had us booked in a two bedroom condo with one master bedroom and one bedroom with a queen bed. I had a meltdown. I tearfully explained to her that I have four kids and that I couldn’t possibly survive the week under that duress. I didn’t think there was enough wine in the state of Florida to get me through!!! She was very kind and upgraded us at no extra cost to a three bedroom condo for our stay. I knew at that moment that everything would be just fine.

And it was PERFECT.

The drive to Orlando was uneventful. We left at 5am, so everyone except Joe slept until we were almost halfway through the trip. Once we got there we were excited to find a gorgeous condo and we went straight for the pool.

Since my step-kids had never been to Disney World before, I wanted them to get a taste of it before we went to the Magic Kingdom the next day, so I booked dinner at the Polynesian resort for the night we arrived in Orlando. I am SO GLAD I did… We had a great dinner and then we rode the boat ferry to the Magic Kingdom and back (while watching the electric water parade). The fireworks started as soon as we docked back at the Polynesian, so we watched them from the dock. After the fireworks were over, we settled into a beach chair on the beach and watched my favorite Disney movie, Tangled, on the big screen on the beach.

I think the excitement and joy of that first night set the tone for the entire trip. It didn’t hurt that we had awesome Fast Pass reservations, plus kids who all like the same rides, and did I mention the weather was actually 15 degrees lower in Orlando that week than it was back home in Raleigh? My step-son even got to celebrate his 15th birthday at the Magic Kingdom. He was wished “HAPPY BIRTHDAY” by pretty much every Disney employee on that day! (I will post more about his birthday dinner soon… it was a HOOT!)

Blended families often face difficulties in scheduling. The key is to not let the bumps in the road cause you to give up. You have to deal with the disappointment and roll with it. In this case, we rolled with it and ended up having the trip of a lifetime with our family. Flexibility is key when in our situation. Since my children’s father gave up his time for us to take the kids to Disney World, I am giving him back that time at the end of the summer so that HE can take them to Disney World.

It’s all about give and take… flexibility… and communication. Who is the winner in this situation? THE KIDS. And that’s all that matters. (Plus I still get to take the kids to Myrtle Beach for the week for the basketball tournament… so I guess I win too. 🙂 )