I certainly do not profess to be an expert at blending families, nor do I claim to even be semi-pro; however, I believe there is comfort when you are going through a new experience in knowing that someone else has walked that road before.  It’s comforting to know that you are not alone… someone else has done it and has come out at the end of the tunnel (relatively) unscathed.

I DO feel like a professional in single motherhood.  After being a single mother of two amazingly strong children for almost nine years, I had gotten the routine down to a science.  I went through all of the stages that single moms go through – the highs and lows, the strength in independence and the depression in loneliness, the happiness my ex moved on and the disbelief he had done so, the joy in knowing my kids had a stepmom who is good to them and the helplessness in knowing my kids had a stepmom who was with them when I was not.  I had times of almost an inner joy explosion (or so it felt at the time) when I walked around my house that my two kids and I moved into and I recognized that it was MINE… and that there would be no anger and insults in my house.  And I had times of crying myself to sleep at night because I felt despondent in the dating scene (hanging out in bars with my girlfriends, online dating, church singles classes) and knew with absolute assurance that I would never meet the right man for my children and me.  All that changed…

My children playing in our new yard on the first day in our new home. They were 4 1/2 and 18 months.

A week ago tomorrow I married my forever love.  It’s not the fairy tale you envision as a child since Prince Charming never came riding up on his steed with two kids on ponies in tow.  There was no fanfare and there was no ball… we were married on our church land in the woods with only our immediate family present.  And it was more than I could have ever dreamed.  The next night we spent our first night in our home as a family.  This is where the true fun begins…

This was the first time we had all been under one roof together overnight.  Both Joe and I felt strongly about not sleeping over with our kids.  They had been through enough trauma in divorce to push adult issues on them.  Because I had been divorced for many years, we did introduce Joe to my kids pretty early on.  My kids were not at the impressionable stage where they are possessive over their mom and resentful of anyone new… they were DYING for me to meet someone.  My sweet girl asked me one day, “Mom, are you EVER going to get married?” to which I replied, “ I WAS married once honey…” and she looked at me incredulously and said, “TO WHO???”  Shocking, but true.  She was so young when her dad and I got a divorce that she had always known Dad and Amy together and always known me, well, single.

Joe and I waited to introduce me to his kids until we were absolutely sure that they were ready and that we had a future together.  So after about five months, I met his kids.  We took it slowly and I did everything in my power to not infringe on their time with their dad.  He has 50/50 custody of his kids, so we spent our time together when he did not have them.  We barely even talked on the phone if he had his kids and they were awake… it was important to us that they not feel like I was stepping on their toes.  They knew I had kids, but we did not introduce them for another month.  The anticipation and excitement of meeting each other was more than they could all handle, but they enjoyed hearing stories about the other kids.  We eased into it one night by having Joe and his kids to dinner.  It was like a homecoming…  The kids got along fabulously and although we have had minor hiccups they have accepted each other with open arms.  I think the way we handled everything from the beginning has helped us get to where we are today.

I truly believe that too many single parents try to force their new love onto their kids before they are all ready.  Having a new love interest is exciting and you want to share everything you can with that person, but your kids are the ones who have the true potential of being hurt.  As a parent, you don’t have the luxury of thinking selfishly.  It’s all about the kids…  And in beginning a blended family, if the kids ain’t happy, then nobody’s happy!!!  Too many parents forget that.  Joe’s kids have asked us why we waited to tell them about us, but when you are honest with children and tell them that you were merely trying to protect their hearts, they respect that.

Back to the present… so our first night together went off without a hitch!  Well, with only a few minor issues…

We have room at my house, so Joe and his kids are moving in with us.  We are going to have to do some maneuvering so that our home becomes OUR home – changing rooms, giving things to Good Will, etc.  Until then the kids are sharing one bathroom – yes, four kids and ONE bathroom. 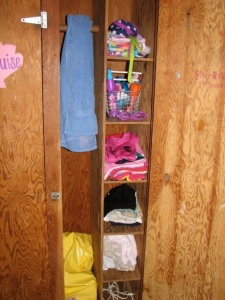 And if the blending of our families can feel like summer camp every day, then SIGN ME UP!!!!  We are not foolish enough to think that it will always be flowers and unicorns and happiness, but we are smart enough to know that we can do this!  We have four absolutely fabulous and resilient kids between us who thrive daily in our love and laughter and smiles.  They come in for a group hug when they see us hugging in the kitchen.  They laugh at us when they see us kissing in the family room.  They dance with us when they catch us dancing while cooking dinner.  And at the end of the day, if we can all sit around the dinner table together thanking God for the amazing day and for abundantly blessing our new family, then I think our new normal is the healing we all need in our lives…

…and maybe more families should go to “summer camp.”