My relationship with Joe has revolved a great deal around music.  We both love to always have music playing and we have always sent each other songs and playlists throughout our time together.  It would only make sense that we would take the kids to see live music since it means so much to us.

Every Thursday night throughout the summer there is a concert up at North Hills mall, which is exactly a mile from our house.  We love to take the kids up there to dance and have dinner. It is a great event with people of all ages from all over NC and it is a fun family event.  If you live nearby and have not been, you need to check out the band schedule because it’s worth the time to try to find a parking spot!  Bring chairs… 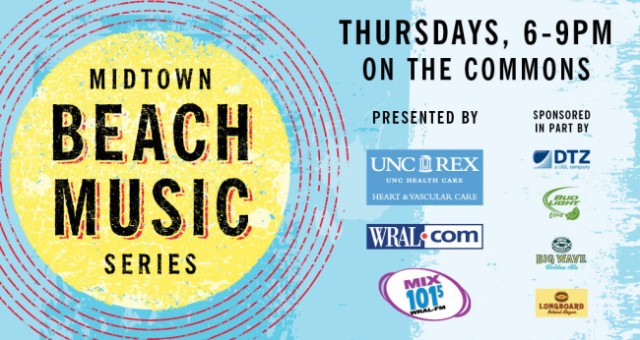 It’s tough for us to make it each week because both of my kids have basketball on Thursday nights (the insane schedule of AAU basketball is another blog topic entirely), so our time is usually cut short and my daughter has even been seen on stage with her basketball jersey still on. 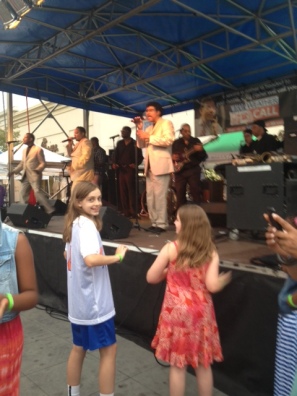 The girls having a big time dancing with Ken Knox… this was right before they got on stage!

Last night we decided to try a different concert series that is also close to our home – the Music in the Valley.  It is a Wednesday night concert series outside at Crabtree Valley Mall.  A friend of ours is in the band that was playing, so we loaded the kids up (plus an extra 13 year old boy) and headed to the mall to meet some of our friends and their kids.

Immediately upon going up the escalator to where the band was set up, there was a totally different vibe than at North Hills.  A heavy mix of smoke and perfume was lingering in the air and there were a lot of women who were dressed in dresses that would have been best served left on the hanger or maybe worn 10 years earlier.  As we were walking through the crowd I heard a man talking to his friends yelling, “That’s bullshit” loudly.  Everyone around us seemed like they had been drinking for a while.

I had a flashback to my single days and it was not a pretty memory.  The days when I proclaimed my independence and told anyone who would listen that “I don’t need a man.”  When I went to places like that and talked to people that I didn’t want to talk to, but I was just lonely enough that their interest in me made me feel a little better about myself.  And it was better than sitting at home alone with my cat.

And the single scene has DEFINITELY changed since I entered it back in 2004.  At that time, I had just turned 30 and was living in Greenville.  There were NO eligible single men.  All of the men were much younger than I and living like college kids or they were married.  I always felt like the oldest person anywhere I went.

The scene last night proved that the divorce numbers have increased exponentially in the 40’s and 50’s age group.  And from what I could surmise, the increase in numbers of single folks certainly did not increase the quality.  It made me sad because I know how it felt to be single in my 30’s, but I cannot imagine the feeling of being single in my 50’s (and yes, I have reminded Joe quite a few times that he better not mess things up since I don’t want to know how it feels!!!!).

My friend Leslie and I said, “I feel like I’ve walked into the internet.  This is like Match.com on crack.”   And now I understand WHY it felt that way… I googled it today and found this advertisement on the internet: 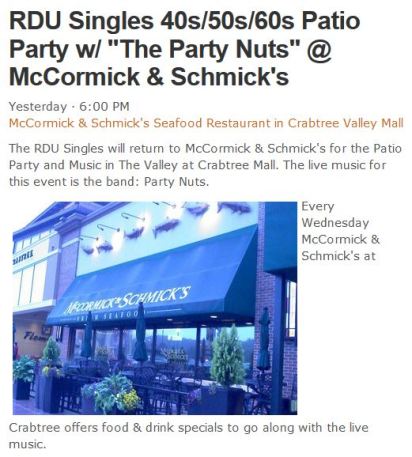 Soooooooooooo, technically we took our kids to a single’s party…. nice.

It was worth a try, but we decided that we will not be going back to the Music in the Valley – with or without kids.  Apparently having a ring on your finger doesn’t keep men from violating you with their eyes. Plus, I definitely don’t want our daughters to think that women in their late 40’s dancing with an imaginary stripper pole on the dance floor is ladylike.

As we walked to the car, I slipped my hand into Joe’s.  I am so thankful for him.

I had to go through many years of the misery of that scene, but now I can go home with my handsome husband and snuggle up for the night.  He is proof that good things DO come to those who wait.  I think God knew what he was doing all those years… all that unhappiness makes me appreciate Joe even more.  Maybe we’ll even turn the music up and dance at home tonight… because we can.

And I am sure when we are old and rocking in our rockers looking out over the water we will say, “Remember that time when we were first married that we took our kids to that singles party?”  Yeah, that happened.